The Bullies are minor characters in the 3 Ninjas films. In their gang, Their original leader is a unnamed bully (who is portrayed by Baha Jackson), Darren, and various other young antagonist school boys. During the third film, Darren has become the second head bully amongst new bullies within the baseball team against the brothers' team (The Dragons) called the Mustangs.

One morning as the boys ride their bicycles to school, Emily becomes separated from the boys and has her bike stolen by them. Later on at their afternoon recess, while playing Colt passes the ball to a clumsy playmate whom doesn't catch the ball, loses it, and ends up in the Head Bully's hands with Darren, another bully in the gang, by his side. They antagonize him and say that he will have to play them to receive the ball back. Soon after, Rocky comes to the commotion and challenges the bullies to a game of basketball; two on two and Giving them a 9-point lead. They played unfair hoping to bully them throughout the game. Despite the dirty play and the lead given, they effortlessly win Emily's bike back.

Additionally, in the international version the boys LOSE the basketball challenge and their bikes, so a scene ends the international version of the film in which they fight the bullies to get them back. Emily remarks about Rocky showing off and how they would not be walking if he didn't show off. The bullies come once more, hold them, and deem they have more problems. As much restraint as Rocky tried, the head bully keep antagonizing him, until Emily tell Rocky to "Show off". Rocky does a series of arsenal on him an ends in a hook heel kick technique which sends the other bully's running. In the end, they get their bikes back.

Darren leads the gang of bullies on the Mustangs team. They play dirty baseball and pick fights with random players from their opposing team, The Dragons. Darren has had a vendetta towards Colt within the past few years and singles him out. 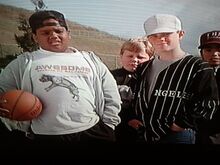