Darren is a minor character in the 3 Ninjas Franchise. He is the long-time bully of the brothers. He is a sidekick to the head bully in the original 3 Ninjas film, but does more physical provocation and antagonizing. In the 3 Ninjas Kick Back film, he is their head bully, leads the gang, and is also the rival team of the brother's as he plays with The Mustangs. During the games, he is known for his dirty playing. He also appears to be romantically involved with Lisa Di Marino during the events of the third film. I need to contact him

On the way to school, while Rocky and his brothers took a shortcut leaving Emily behind, Darren and the other bullies stole her bike. During the afternoon recess at their school, He is a sidekick to the Head Bully whom they antagonize Colt when his clumsy playmate loses the ball. Rocky comes onto the scene and challenges them to a game of basketball (2-on-2) in order for them to receive their ball back and Emily's bikes. They also told them if they lose, they get their bikes. Rocky and Colt gave them a 9-point lead.

During the game, Darren antagonizes the brothers more than the main bully. On their eighth point, he pushed Rocky over when making a shot. Rocky restrains himself when Colt comes to his aid. Darren eventually causes Colt to fall when going for a layup which ends up successful, but Colt ends up grounded. Colt gets up angered and walks towards Darren who is tempting him to throw the first blow saying, "Go ahead." Instead, Colt restrains by snatching the ball from his hands and rubs the point in his face. Darren says, "Chicken." under his breath. Rocky scores the winning point with an unexpected high flying dunk disappointing him and the head bully as they have to give the ball and Emily's bike back.

Additionally, in the international version the boys LOSE the basketball challenge and their bikes, so a scene ends the international version of the film in which they fight the bullies to get them back. Emily remarks about Rocky showing off and how they would not be walking if he didn't show off. The bullies come once more, hold them, and deem they have more problems. As much restraint as Rocky tried, the head bully keep antagonizing him, until Emily tell Rocky to "Show off". Rocky does a series of arsenal on him an ends in a hook heel kick technique which sends the other bully's running. In the end, they get their bikes back. Darren runs away scared with the other bullies leaving the head bully on the ground.

Darren is now the head bully of the brothers and plays on the opposing baseball team called the Mustangs. As the mustangs play baseball dirty against the dragons, Darren continues his tension with Colt. The catcher of the mustangs puts dirt in Colt's baseball cap while he is tying his shoes, then Darren throws a pitch directly hitting him in the head. Darren and Colt are walking towards each other with the tension building up. The catcher trips Colt and Darren tries to take cheap shots resulting in both teams in a massive confrontation.

In the neighborhood, Darren and his gang find the brothers walking and follow them. As the brothers are play fighting, they surprise them when one of the his gang members agrees with the playful comment Tum Tum makes about his eldest brother saying he looks like a "four-eyed beast" which Darren co-signs. One bully remarks to Colt saying, "What do you call him? "My little pony." Tum Tum remarks, "Kick their butts, Colt." Darren provokes Colt some more by saying, "Yeah, I'd like to see you try. C'mon." Rocky showing restraint, demands they return to the house despite how much Colt wanted to fight him. Colt eventually goes, but is angry with his brother for not letting him make a decision. Darren keeps provoking by saying, "Yeah, go inside. You strike out kid." Still provoking he mockingly says, "See you Sunday Dragons."

Once more Darren's team, The Mustangs, plays the brother's team, The Dragons, for the baseball championships. Darren hits a ball nearly making a home run, but it ends up being caught by Miyo to his frustration. He continues to antagonize Colt and tries once more throwing at his head, but he dodges. After that, he is warned by the Umpire that if throws at Colt again, his team will be disqualified. The tension is heavy as he throws the pitch the Colt desiring to humiliate him. He pitches and it is a home run with his team winning the game.

After the game, Darren is angered from the loss and deems that the game is over saying,"Extra innings on the parking lot". He pushes Colt as he is speaking to his brothers and Miyo. Colt makes him a deal saying, "Your best man, and you can pick anyone of us to fight against." Darren picks the lone face Miyo as he resented her for catching his home run. The brothers begin to smirk at the hasty thoughtless decision Darren has made. Darren advances towards Miyo whom jumps over his head and taps him on the shoulder. As Darren recognized she is behind him, she lets out an intimidating karate shout making Darren screams in shock as she palms him in the face. Attacks land as the movie ends implying that Darren got owned by Miyo.

While being a guy of a certain hip style, he is approximately the same age as Samuel being about eleven or twelve years of age, but aggressive and eager to get into a fight. In the original film, he has less to say, but has more intimidating stares and wants physically antagonize. In 3 Ninjas Kick Back, he appears to be older, more toned in the body, and is main bully where the intimidating stares and physical antagonizing continue, but accompanied with more dogmatic comments towards people; especially Colt. 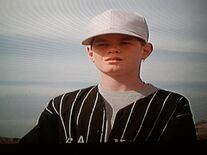 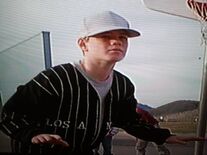 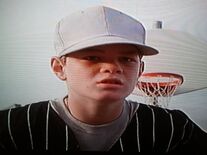 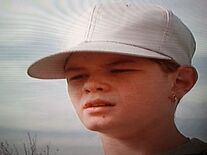 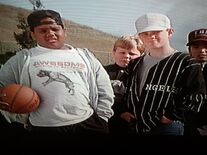 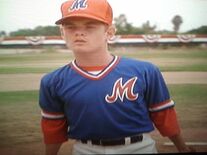 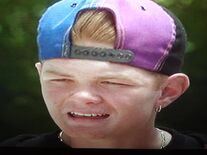