Fester is a minor character in the 3 Ninjas film whom ultimately attempts to help the main antagonist. He the nephew of Mr. Brown from his unnamed sister. He and his buddies, Hammer and Marcus attempt to assist Mr. Brown and Synder by kidnapping the young ninjas to cease Sam Douglass and the FBI from taking any further actions against their plans.

Snyder arranges to kidnap the boys. Mr. Brown suggest to him that he knew someone who can help and has help on several prior missions they've had and that he was a relative of his. Snyder tell Mr Brown to make the call for him and hire his surfer nephew Fester and his friends Hammer and Marcus. During the night they attempt to kidnap the boys, their father comes home with a few of his colleagues which they're forced to withdraw the attempt. The next morning as the boys ride their bicycles to school, Fester and his crew fail to grab them.

The boys are at home with a babysitter when Fester, Marcus and Hammer show up. Fester and his buddies jump on the pizza delivery guy and Fester poses as him in order to have a reason for entry. The kidnappers subdue the babysitter and lock her in a closet. Colt witnesses them subduing their babysitter and their guns and tells his brothers. The boys decide if they can take care of Fester and his gang themselves, then their ninja training would be worthwhile. Using booby traps and their ninjitsu, they weaken the intruders.

After the boys' weaken the intruders, they go to the boys' room and figure out how to lure one of their contacts at which they take captive. The contacted Emily attempting to imitate Rocky's voice, but successfully works with Emily half asleep and less aware. They hold Emily captive at the door. They bring Emily to the door of the study room as captive at gunpoint. Meanwhile, Colt's trick with the instant diarrhea works on Hammer and Marcus leaving Fester alone with Emily. He confronts Colt and Rocky and holds them gunpoint, but ask where their little brother is. Tum Tum says "Up here!" and suddenly attacks with a tennis racket hitting Fester in the head. While Tum Tum hits him, Emily faces Fester by kicking him in the shin and gives him a powerful right hook knocking him out into the door frame face first and then finally to the ground unconscious. The brothers look impressed the whole confrontation. Colt say, "Alright Emily." She non-nonchalantly says, "No sweat." and fold her arms and leans on the door frame and looks up to see Tum Tum. After this, his buddy Hammer is subdued by Rocky and Colt, and Marcus is subdued by Tum Tum. 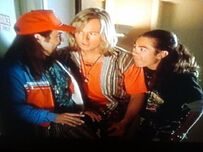 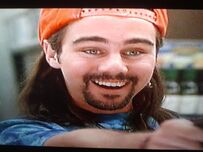 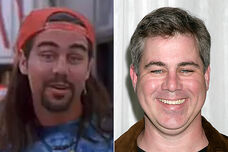