Jack Harding is the main antagonist in the 3 Ninjas Knuckle Up film against Charlie, the young ninjas, Jo, and her tribe in the 3 Ninjas Knuckle Up film. He is a successful business owner, but responsible for the toxic waste in his landfill which Charlie, Jo and the rest of their tribe oppose. He sends his men to do most of his corrupt dealings and will go as far to bribe city officials to ochestrate his plans.

At the beginning of the film, when the the brothers are on their way to spend summer with their grandfather, Mori Shintaro, Jack Harding is surrounded with law official trying to move people from the land. The commotion is so heated that is has drawn attention to media. The people protest his actions and move J.J. and his men to take control of the situation which causes multiple confrontations.

When the brothers seek out Jack's men, J.J. and his buddies, around in the city, they follow them to the city counsel where Jack Harding was making dealings with the Mayor and other city officials for corruption. They also find out he is the one behind the kidnapping of Jo's father. Later that night, Jo and the young ninjas rescue Charlie to his frustration and worry that his corrupt dealings will be publicized.

During the celebration of the brothers returning Charlie to his homeland, Jack's Harding invades them once more and a confrontation arises once more, but the tribe fights them back along with the young ninjas and their grandfather having arrived looking for them. After the defeat, Jack plans to have Charlie's daughter, Jo, kidnapped in order to cease any action from him and his tribe.

During the next day, Jo's mother attempts to take her daughter, Rocky, Colt, Tum Tum to the court hearing, but the group is ambushed by Jack Harding's men and Jo is kidnapped as Jack had planned. While Jack bribes Charlie, Rocky and his brothers get information to where Jo is being held and drive out to free her. While Charlie is exhausted and stressed of his daughter's disappearance in the bathroom, He gives Charlie a false disk to show in the courtroom along with more subtle harassment.

Having found out Jo got away, he sends J.J. and his men to guard the front entrance of the court in a last attempt to prevent the truth coming out. The brothers defeat Jack's men and make way for Jo to get into the courtroom. Once his daughter shows herself, Jack has the struggles trying to claim the real evidence but stubbornly demanding, "Let me have it!" Charlie then delivers a powerful right hook knocking him onto one of the court counter tops knowing his daughter is free from harm.

To his dismay, the landfill ends up shut down permanently after the environmental protection researches the correct disk Charlie provides them with at the court hearing. 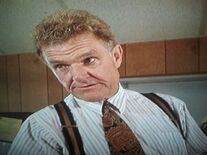 Jack Harding is portrayed by Charles Napier in the 3 Ninjas Knuckle Up film.