Koga is the main antagonist in the 3 Ninjas Kick Back film. He bribes his nephew Glam into pursuit of Mori Shintaro for the dagger in order to enter the cave of Gold underneath Castle Hikone located in Japan.

Koga trained in martial arts at a young age in Japan. As a teenaged martial artist, he competed against the young teenage prodigy, Mori Shintaro, and lost to him. After his lost, he attempted to steal the dagger from him. Quick to react, Mori sliced his face leaving a scar. He has trained since and awaited Mori fifty years for his revenge.

In Japan, Koga breaks into a museum dressed as a ninja and steals a valuable sword. The alarms go off the minute he has the sword in his hands. After a few confrontations with security guards, he manages to escape via hang glider.

He later sends his nephew, Glam, a picture of Mori Shintaro and the dagger. When he gets on the phone with his nephew, he speaks down to him saying,"My idiot nephew, forget the weather! Did you get the pictures?" He bribes him with a cash reward to retrieve the dagger. His nephew is swayed by the cash reward and accepts. 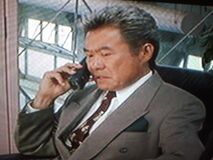