Lee is a minor character in the 3 Ninjas Knuckle Up film. He is a brave, middle-aged Native American gentlemen whom leads the protest with his tribe against Jack Harding the freedom of her land by ridding of the dump that contains various toxic waste that hinders her lineage. He is best friends with Charlie and a family friend.

Lee leads the protest with his tribe during the beginning of the film. Jack takes the microphone from the Sheriff and threatens to have the group of people arrested for trespassing. Lee speaks up by saying, "You're the one that should be arrested, Jack Harding! Your business is killing our people!" After that is said, they continue to protest. After that, Jack moves J.J. and his men to take control of the situation which causes a major confrontation. Lee takes action to the best of his ability.

The Mayor warns the defendant, Charlie, that his allegations are serious in nature and hope he has evidence to back it up. His best friend, Lee, speaks up and says,"We most certainly do, Mayor." and supports Charlie in his presentation. Lee very determined to put an end to this, he urges Charlie to tell him about the disk during the court hearing. 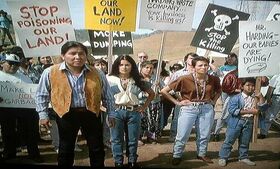