Mary Ann Rogers aka "Medusa" is the main antagonist in the 3 Ninjas: High Noon At Mega Mountain film.

While Rocky, Colt, Tum Tum are at the home of their Grandfather Mori for the summer to perform their ninja training. After being put to an obstacle course test and failing, Tum Tum overhears Rocky and Colt talking about no longer returning since they are older and have more adult things to do, depressing him. After they return home from their vacation, they meet Amanda when their heads are almost buzzed off when her out-of-control radio-controlled helicopter also broke one of their windows. After making amends, she is invited to Tum Tum's birthday party the following day at Mega Mountain which she accepts. Tum Tum is also very depressed when his favorite action hero Dave Dragon is set to retire and end his television series due to poor ratings, and even concerns his mother when she offers him food, to which he replies that he says "No thanks Mom, I'm not hungry".

The following day, the boys and Amanda are dropped off at Mega Mountain, and Rocky disappoints the rest by opting to spend the day with his girlfriend Jennifer rather than do so with Tum Tum and his wanting to see Dave Dragon who is performing live for his final performance. Colt and Tum Tum both admit the admiration toward him and remember how cool he previously had been. During these goings-on, a master criminal named Mary Ann "Medusa" Rogers, her right-hand man Lothar Zogg, her Jamaican sidekick C.J., her three idiot nephews Carl, Buelow, and Zed, and a small group of mercenaries infiltrate the park, take over its operations, and attempt to take Dave out after his performance (interrupted by Tum Tum and Colt who seek him out for an autograph). She threatens the park's owner Harry Jacobson to pay her enough money or she will cause accidents on the rides. This causes the police and the FBI led by the boys' father Sam to be called in.

After fending off the thugs and rejoining Rocky who had spotted them while away from Jennifer, they wake Dave up and become suspicious as a great deal of the park is closed off and several rides begin to go crazy. Amanda utilizes a laptop computer and is able to hack out some of the programs. However, Medusa quickly has her access locked out, and suspends a roller coaster train full of passengers at the top of a loop, threatening Harry with their deaths if he does not pay her a large sum of money. Dave tries to infiltrate their operations, and is captured while Colt, Rocky, Tum Tum, and Amanda continue to evade Medusa's henchmen and nephews. She manages to have the latter kidnap Jennifer and use her as bait to keep the kids from interfering by tying her to the coaster's track and threatening to release the train, causing it to run over her. Rocky battles with Lothar while attempting to free her, and causes him to literally bounce out of the park and into the hands of the authorities. Medusa releases the train to race past Rocky and Jennifer. She tells him that he saved her and kisses him. Harry then begins to give Medusa the $10 million bag by bag. But as the final one drops Amanda uses her helicopter to cut it open. Medusa discovers this, grabs her, and handcuffs her to the coaster track's railing.

Rocky meets up with his brothers and they run into Dave. After they inform him about Amanda's capture they all unite to save her. Meanwhile Medusa tells her about her plans for her. She plans to use her as a hostage to escape. Then she will be her personal slave to work off the lost money. Medusa estimates that in 50 years they will be even. The boys are able to defeat many ninjas before they catch up to her. She compliments their skills but then decides to even the odds by shooting the lights out. This gives her ninjas the upper hand because they have night vision goggles. While they are taken care of she gives Amanda a little "surprise", Instead of being Medusa's slave, she will be blown to bits by a time bomb that she leaves behind.

The boys manage to overcome their inability to see in the dark (the problem with their obstacle course at the beginning) and save Amanda, but her laptop breaks down and she can't disarm the time bomb she's attached to. Thinking quickly, they attach it to an oxygen tank on rollers and attempt to break its valve to send it away. But despite the boys' skills as ninjas, they lack the physical strength to do so. Luckily, Dave arrives and does so. The rollers send the oxygen tank-taped time bomb off like a torpedo directly toward Medusa's escape route, just as the timer runs out. The explosion draws the authorities' attention, and they quickly capture her still clutching her bag of money. She pouts and seats herself with it, surrendering to the FBI.

Once Medusa and her minions are in jail, the boys also give credit to Dave for helping to save the park when interviewed by the media. Later, they assure Mori that they are not going to give up their summers with him for anything, enjoying learning to be ninjas, and even recruit Amanda to join them next time, an offer she accepts graciously. 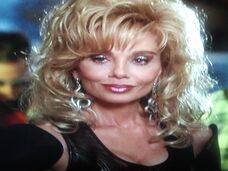