Originally known as Mori Tanaka and then later as Mori Shintaro (for unknown reasons) is the Japanese father of Jessica Douglas, estranged father-in-law to Sam Douglas, and grandfather to the young ninjas, Samuel "Rocky", Jeffrey "Colt", and Michael "Tum Tum" throughout the entire 3 Ninjas Franchise. Every summer, he trains the boys in martial arts until they reach a certain level in their training. Once they reach that level, he starts training them in Ninjitsu "Ninja's tricks" and gives them their unique ninja names.

Mori Shintaro was trained in martial arts from a young age. When he was old enough, his father gave him a mask with his ninjas name which the name remains unknown. As revealed in 3 Ninjas Kick Back, as a teenaged martial artist, he fought for the honor of receiving the legendary dagger against Koga and defeated him. Reaching adult years, he progressed further in his study in ninjitsu. He married an Caucasian woman and they had a daughter called Jessica. Later, he becomes business associates with Hugo Snyder at which he held him at high esteem at one point and gave him instruction on Ninjitsu. Snyder once admired his daughter, but to his dismay, she fell in love with Sam Douglass at which they had become enemies. Mori has washed his hands with the associations between him and Snyder possibly due to his demeanor after Sam marries Jessica.

In the un-edited German version of 3 Ninjas, we learn that Mori owned a franchise of karate studios with Snyder as his partner and co-teacher, but something happened between the two at some point in the business venture that cause them to part ways. It is not implicitly stated what that was, but it is assumed that Snyder was using the students to train them to be a part of his now-standing ninja army.

Each year, Samuel and his brothers visit the cabin of their grandfather Mori Shintaro for the summer. Mori is highly skilled in the arts of Ninjitsu, and for years has trained the boys. This year, Mori presents the boys with their new "Ninja names":

Meanwhile, the boys’ father, Sam Douglas, leads the FBI on a sting operation against Hugo Snyder , to buy warheads. Snyder escapes because ninjas were in the rafters. When he returns to his hideout, he explains his relationship with Sam to his assistant Mr.Brown and bodyguard Rushmore. He has known Douglass for years, since his former master Mori Tanaka trained him.

On their last day at the cabin, Snyder arrives to test his old master by sending ninjas after him. Defying their grandfather's orders to stay in the house, the boys fight a few of the ninjas. After they are victorious, Snyder threatens Mori and his family’s lives if he does not get Douglas off his back; he also threatens to rip out his heart if he does not. When the boys return home, their father is talking to his partner Jerry. Douglas hates martial arts, despite having married Mori's daughter Jessica, he is not enthusiastic when the boys try to show him what they learned, and more irritated when they explain their Ninja names. Snyder arranges to kidnap the boys and tells Brown to hire his surfer nephew Fester and his friends Hammer and Marcus.

On the same night, Mori is shown sword training in the forest close by his cabin knowing Snyder is planning to something against his family. Determined and resolved, he quietly says to his faithful sword, "We will protect our family, Old friend." The next day, during the time his grandson's where in school, Mori was following Snyder's men to a ship near the harbor. Mori not knowing also that he was followed by Sam and the FBI.

After his grandsons defend themselves against Fester and his buddies, they are taken by Rushmore and Mr Brown. The FBI and law officials are investigating the scene. Sam, Jessica, and learn from a note Emily gives them that Snyder is responsible. Mori comes to the scene dressed in his ninjitsu attire. Mori then offers to sneak in and rescue them. Mori and Sam clash in philosophy at which is best course of action at which Jessica intervenes and tells them to stop arguing with each other and think about the boys. She deems that her father is a very special man and if Snyder sees her husband that he may hurt the boys. Sam clears the boundary by saying, "Mori, We both hate Snyder, and I know that, we both love those boys. Now, I'm trusting you to bring them home." Sam gets a brief message and then tries to continue to converse with a mysterious departed father-in-law. Jessica then tells her husband, "I told you he was special."

Mori slips into Snyder's hideout (which is a large freight ship in dock), while the boys trick their guard and escape. After several confrontations through the ship they come across Rushmore, whom they defeat with Mori’s help saying," Remember the practice dummy. Light up the eyes boys, Light up the eyes!" The ninja draw there guns on the young ninjas at which Mori jumps from the railing to relieve them. Mori reunites with the boys, as Snyder confronts Mori. Mori is manhandled throughout the fight since Snyder is much younger. When it seems that Snyder is about to win, Mori remembers the jelly beans that Tum Tum had given him for good luck and uses them to gag Snyder. Mori gains the upper-hand and phases Snyder, more or less winning the fight. Mori has a chance to deliver a blow that wold have most likely killed Snyder. With his grandsons, looking with their eyes and mouth open realizing he could actually murder someone, Mori drops Snyder in mercy.

In frustration, Snyder grabs a gun from one of his subordinates and takes aim at Mori and the young ninjas. At that moment, Sam shoots Snyder in the arm from the top of the ship (he and a large SWAT team had surrounded the ship as Snyder and his guards were distracted with the fight against Mori and the boys). As the group is receiving medical aid, the FBI takes Snyder and his men to jail. Sam apologizes to Mori, and tells Jerry to fill out the reports himself because he had a whole family of heroes he needed to take out for pizza. Mori lightly remarks, "I hate pizza...." As the boys are over excited how they conquered the night's events, they begin to argue over them, Mori begins to scold them for their lack of discipline which all them remark, "Sorry Grandpa" leading into the ending credits.

Mori Shintaro resides in a cabin in the forest. Every summer of the year, instead of going to summer camp, he takes his his daughter's kids, his grandchildren and trains them like heirs in martial arts starting from a very young age to his Son-in-law, Sam Douglass's dismay. One summer, after so much instruction in karate, he instructs them with ninjitsu teaching and gives them ninja names.

Mori's last name was specifically stated as "Tanaka" several times throughout the first 3 Ninjas movie. Later, this name is changed to "Shintaro" in 3 Ninjas Kick Back unexplicably, leading to believe that one of the names may in fact, have been Mori's ninja name. Also possibly he changed his last name for protection after his encounter with Snyder and his ninja clan.

Jessica is his beloved Daughter. They share a great father-daughter relationship. She is often protective over him when her husband, Sam, or her sons may say something against him. She is also very supportive of him teaching her sons martial arts and ninjitsu. Understanding how formidable her father is, she knows they are being trained well and seldom worries for their safety.

He is his Estranged Son-in-Law. He marries his daughter Jessica, but despite this honor, he hates martial arts. Intially, Sam does not like his sons to be trained in karate and even more frustrated when they had ninja names. Throughout the series, he warms up to his father-in-law and his teachings to his sons.

Sam is his oldest grandson and oldest heir. He gives him the name "Rocky" for being the heir known for his strength and leadership of his brothers and his style of fighting.

Jeffrey is his middle grandson. He gives him the name "Colt" as he sees him as the spirit of his brothers and his fighting style. He often scolds Jeffrey for his sarcastic attitude.

Michael is his youngest grandson. He gives him the name "Tum-Tum" as he sees his energy begins and ends with his "Tummy". He was given this name at a tender age. His grandfather sees him as the Heart of his brothers being the youngest.

He is his former business associate. He hovers much resentment towards Mori possibly due to Sam's courtship to Jessica. Since then, they have had bad blood. Synder and Mori have a bout which Synder cheats and nearly kills Mori, but Mori gags him with jelly beans from Tum-Tum and wins the battle.

He is a childhood rival of his hometown. They battles as teenagers for the legendary dagger and Mori won. Out of curiousity of the story, Koga tried to steal which prompt Mori to protect himself in which sliced part of his face creating a scar.

He bids his nephew and his friends to invade his house and steal the dagger which ends up a failure. Later, He kidnaps the brothers and Mori while in Japan in attempt to uncover the secret behind the Cave of Gold. After they battle, Koga attempts to kill Mori once and for all, but Jeffrey prevents it by his advanced ninja training by throwing a ninja ball directly into the barrel of his gun. Mori persuaded Koga to come with them saying "It's not worth it!" Koga forgives Mori after fifty years of resentment and grudge.

Mori is warmly acquainted to Miyo by his grandsons to be the young female kunoichi champion. He is surprised to find that she is a female fighter. Nevertheless, he honors her with the legendary dagger with his grandsons there to represent his lineage to her in the essences of what a ninja truly obtains; mind; body, spirit and heart. 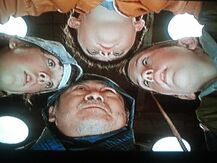 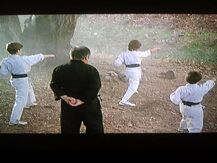 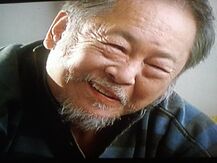 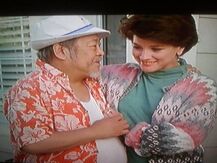