Samuel "Sam" Douglas is a prestigious FBI Agent and father to the three young ninjas. He is marries Jessica, and becomes father to Samuel "Rocky", Jeffrey "Colt", and Michael "Tum Tum" throughout the entire 3 Ninjas Franchise. Throughout the movies, Sam is shown to disapprove of their grandfather's martial arts teachings out of worry. He eventually grows to accept their martial arts identities and discipline, therefore creating a stronger bond with his father-in-law and his sons.

While the his sons were with their grandfather training on their last day at the cabin, Sam Douglas leads the FBI on a sting operation against Hugo Snyder, to buy warheads. Snyder escapes due to the ninjas were in the rafters. A warzone rages in the warehouse with the law officials and his ninja subordinates to his frustration. Sam follows Snyder to the top of the building and seemingly has him corner before he has subordinates take aim at Sam and shoot allowing Synder to escape. Sam pursuits him to the top of the structure. He demands him to freeze, but a chopper arrives with gunfire making him standby. Once clear, Sam take aim, but misses Synder who has escaped the scene by chopper.

When the boys return home, their father is talking to his partner Jerry. Douglas hates martial arts, despite having married Mori's daughter Jessica, he is not enthusiastic when the boys try to show him what they learned, and more irritated when they explain their Ninja names. He departs with his partner, Jerry, possibly working more on the case. Before he leaves he tells Colt, "Don't forget to kiss your mother hello, Jeffrey." In preference of his new name, he remarks, "It's Colt" after his father had already driven away.

The next day, during the time his grandson's where in school, Mori was following Snyder's men to a ship near the harbor. Mori not knowing also that he was followed by Sam and the FBI.

During the invasion of their home and their boys defending themselves, Jessica and Sam are on the way home from the meeting discussing whether the boys should be able to continue seeing their grandfather for martial arts training. She states, "Well forgive me for being so supportive of my father, my Asian side i guess... Her husband says, "Well, that's great. Then why are you giving your husband such a hard time." She hesitantly says,"Well, that my American side." He remarks, "That's very funny." She continues to say, "Look Sam, they love what they do, and they love him." He pleads, "Sweetheart, all I am trying to say is that someone may get hurt."

By the time they get home, they find the boys missing. The FBI and law officials investigate the scene. Jessica learn from a note Emily gives them that Snyder is responsible. The note reads "...and lay off Snyder." which was directed towards Sam Douglass. Before Jessica can ask Emily anything else, she runs away (possibly fearing further interrogation by authorities). She calls Sam and tells shows them the note crying, "Snyder took the boys! yes.." Sam promises his wife they will get them back.

Mori comes to the scene dressed in his ninjitsu attire. Mori then offers to sneak in and rescue them. Sam clashes with Mori in philosophy at which is best course of action at which Jessica intervenes and tells them to stop arguing with each other and think about the boys. She deems that her father is a very special man and if Snyder sees her husband that he may hurt the boys. Sam clears the boundary by saying, "Mori, We both hate Snyder, and I know that, we both love those boys. Now, I'm trusting you to bring them home." Sam gets a brief message and then tries to continue to converse with a mysterious departed father-in-law. Jessica then tells her husband, "I told you he was special." He replies quietly to his wife, "I hope so..."

Sam arranges a large SWAT team had surrounded the ship as Snyder and his guards were distracted with the fight against Mori and the boys. At that moment Synder tries to shoot Mori and the boys from out of frustration in losing to More, Sam shoots Snyder in the arm from the top of the ship. As the group is receiving medical aid, the FBI takes Snyder and his men to jail. Sam apologizes to Mori and thanks him by attempting to hug him, but an injured Mori groans in pain from the fight when hugged and proposes, "A small bow will do, okay?" Sam gives Mori a slight bow thanking Mori for his bravery.

His sons thank him for coming for them, but he says that they are the real heroes there, not him. They ask if they can still see their grandfather. He happily accepts and calls them each by their ninja names. His wife stands by happy to see her family together and him bonding with his sons and father-in-law. He tells his partner, Jerry, to fill out the reports and collect the evidence himself because he had a whole family of heroes he needed to take out for pizza.

He is the coach of his sons' baseball team called the dragons. He, his wife and his father-in-law witnesses his sons' various growing phases on the field. He scolds the boys for their bad behavior when the game is canceled after Colt finally losing his temper with his bullies from the other team and causes the confrontation among st both teams. Upon scolding, he once more blames it on their ninjitsu training saying, "You see what all this ninja-stuff does? All they want to do is fight." Their father continues scolding Colt about the game as he was the major incident. He scolds Colt about his temper, but his wife says," I wonder where he gets it from.

Before taking their grandfather to the airport, He continues to talk to his son about the game and having a cooler temperament. Colt is annoyed by the constant reminders, but sarcastically agrees. His mother intervenes by saying, "Hey, don't forget your father was a kid once too." He sarcastically says,"I thought he was born full grown with a suitcase." She calmly says,"That's enough, Colt."

When the boys went to Japan without to help their grandfather out beyond their parent's knowledge, Colt and his brothers are in middle of a confrontation with Koga's ninjas and has taken one of their phones to call their parents as it is two in the afternoon which they promised to call. Tum Tum successfully gets their mother on the phone, but eventually their father grabs the phone by the time Colt and Rocky get the phone. Sam once more scolds Colt about the ninja training which he frustrated he says while fighting a ninja, "Fine. I'll set aside for a month." Sam knowing how his son is says,"Don't be a smart kid!"

During the time their sons and Miyo are imprisoned in Koga's headquarters, Sam and his wife are thinking about them and missing them while in their bedroom looking at their photos. He tells his, "You know it doesn't even seem to think to care what I think anymore. They listen to their grandfather more than they listen to me." His wife tells him, "Well, they listen to their grandfather because their grandfather listens to them." He starts to say, "I just wish they can behave more like..." His wife finishes by says, "Like what? Like you?" He agrees. She tells him "They can't honey, they're not you. They are Samuel, Jeffrey and Michael. He says,"No they're not." Finally accepting both identities once and for all he says, "They are Rocky, Colt, and Tum Tum. I just wish they'd come home." His wife agrees as they embrace each other as they miss their sons.

Despite his conflict with his older sons on the phone, by the time the return to America for the game he is overjoyed to see them. Amongst returning back to America, the boys had a cooler mindset having advanced in their training in Japan. His sons played baseball with more spirit and sportsmanship and he even complements their friend Miyo on a successful dead field catch. During a pep-talk with his sons, he told them he was very proud of them. His sons propose "Four strands of rope" which in the past they only did with their grandfather. He agrees, "Four strands of rope. " as he puts his hand on top of his sons and cheers for a good victorious game.

He doesn't play a role in 3 Ninjas Knuckle Up, nor is he mentioned, but if shown most likely would have assume his role as the boys' father 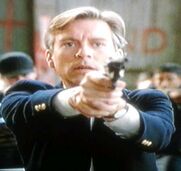 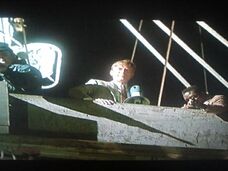 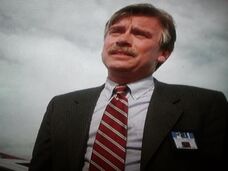