The Umpire is a minor character in the 3 Ninjas Kick Back film. He announces "Play Ball!" and many other various calls during the game. He cancels the first game between the Dragons and Mustangs due to the lack of sportsmanship. The character was played by Don Stark, who also played the corrupt bumbling police officer in Ninjas Knuckle Up 3 Ninjas Knuckle up.

He cancels the first game between the Dragons and Mustangs due to lack of sportsmanship. He pulls the teams apart and announces that the teams disgrace him and baseball history and proposes the game to take place once more when the teams cool down and get past differences and played baseball like respectable citizens.

In the second game, he is talking to Sam Douglass whom is short players. He tells Sam, "What are you going to do, Coach? You can't play with only six players." Sam comes to the conclusion that he has to forfeit after this conversation with him. The announcer begin to state what the dragon intention is towards the game which the brothers chime in by saying they are going to play ball. After the brothers announce their surprise arrival and the Dragons not announcing their forfeit, he states with a certain preference and enthusiasm, "You hear em! Play Ball!"

The Umpire continues to make his calls for the second game. Despite his pep-talk with both teams, the tension between Darren and Colt remains. Darren continues to antagonize Colt and tries once more throwing at his head, but he dodges. After that, he pauses the game and warns him and his coach that if he throws at Colt again, his team will be disqualified. After much tension, Colt hits a home-run and the umpire shows a preference for the Dragons and cheer them on for victory.

He is the enthusiastic, outspoken umpire of the youth baseball games. He appears in the film to be slightly hotheaded, but he calls it how he sees it and is quick to defend his decisions against any who oppose.

The umpire chews chewing tobacco, as shown when he spits a brown liquid onto his own chin before going on his "This is the most disgraceful game I have ever seen in baseball history!!!" tirade. Along with chewing tobacco, the umpire is often seen chewing on an unlit cigar during the games, even with his facemask on. This may be that the umpire is trying to quit smoking, and it makes him irritable, thus explaining his loud and annoying tone when announcing anything. 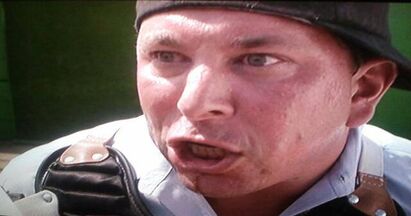 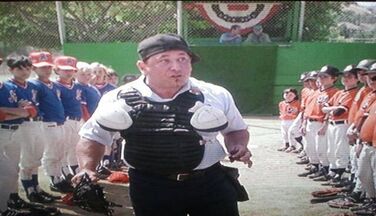